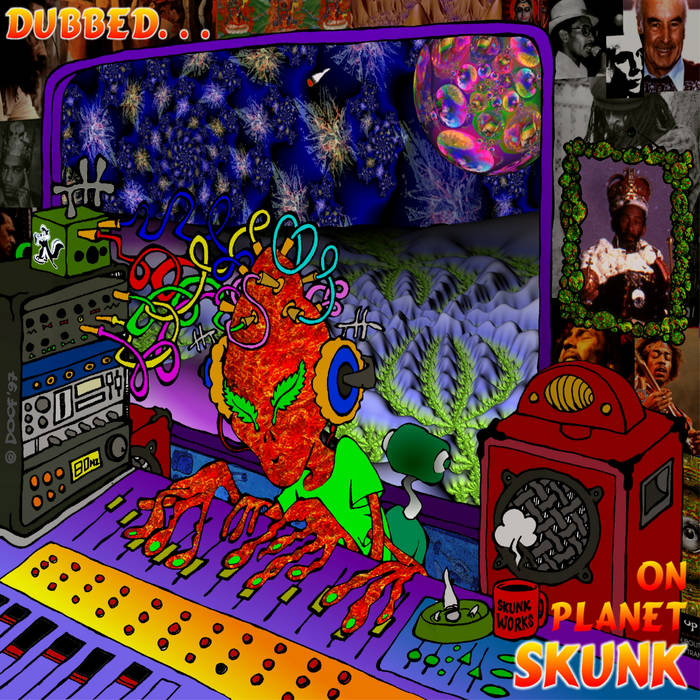 Bethelina_DJ Dubbed on Planet Skunk is a genuine head trip. Like its companion album, Mashing Up Creation, it will definitely alter your mindset. Was meditating to this album and the structure of my senses warped, my imagination swallowed the smokescreen of my clouded thoughts, revealing an inner landscape that shifted like a mandala, colours merged and began to swirl. Opening my eyes I saw the room had changed in luminescence, it was brighter, warmer, vibrant, and I was immersed in music, totally Favorite track: Snow (Zion Train Remix).

Having recently re-connected with some of the artists featured on our first releases, we’re now in a position to re-release a 2022 version of Dubbed on Planet Skunk, featuring 8 out of 10 of the original tracks.

This is an edited version of what we said at the time: the dubmission crew return with another compilation, which rolls its way through dubs drawn from across the musical spectrum. In the dub corner, we have modern roots champion, Alpha & Omega; acid dub pioneers, Zion Train; and bass technicians, V-Neck. In the techno corner, we have trance pioneer Doof; sonic terrorists, Quirk; and the eclectic lunacy of Qualia. From the club corner, the exceptionally cunning Lone Stuntman, and from the punk corner, growling mad Stratfordians, Hedonastik.

As with Mashing Up Creation, we managed to get some pretty amazing press feedback: our “red-eyed trawl through modern computer-based emulations of the original Jamaican blueprint” (DJ magazine) featured “ten Tracks of pure hedonastic pleasure” (Kiss FM) “where the bass is mightier than the keyboard and the FX are awesome” (Music Week). While we liked Muzik’s description, “low-end frequency modulations for the post-club comedown”, we loved Weed World’s: they hailed Dubbed on Planet Skunk as “a stoned selection guaranteed to enhance your high”.

5. The Lone Stuntman – Thank You For Smoking
Moog by Kieran
Voice by Howard Marks
Written and produced by Phil Benedictus

Original image by Doof
Tweaked and fractalled by Billy
williamrood.net